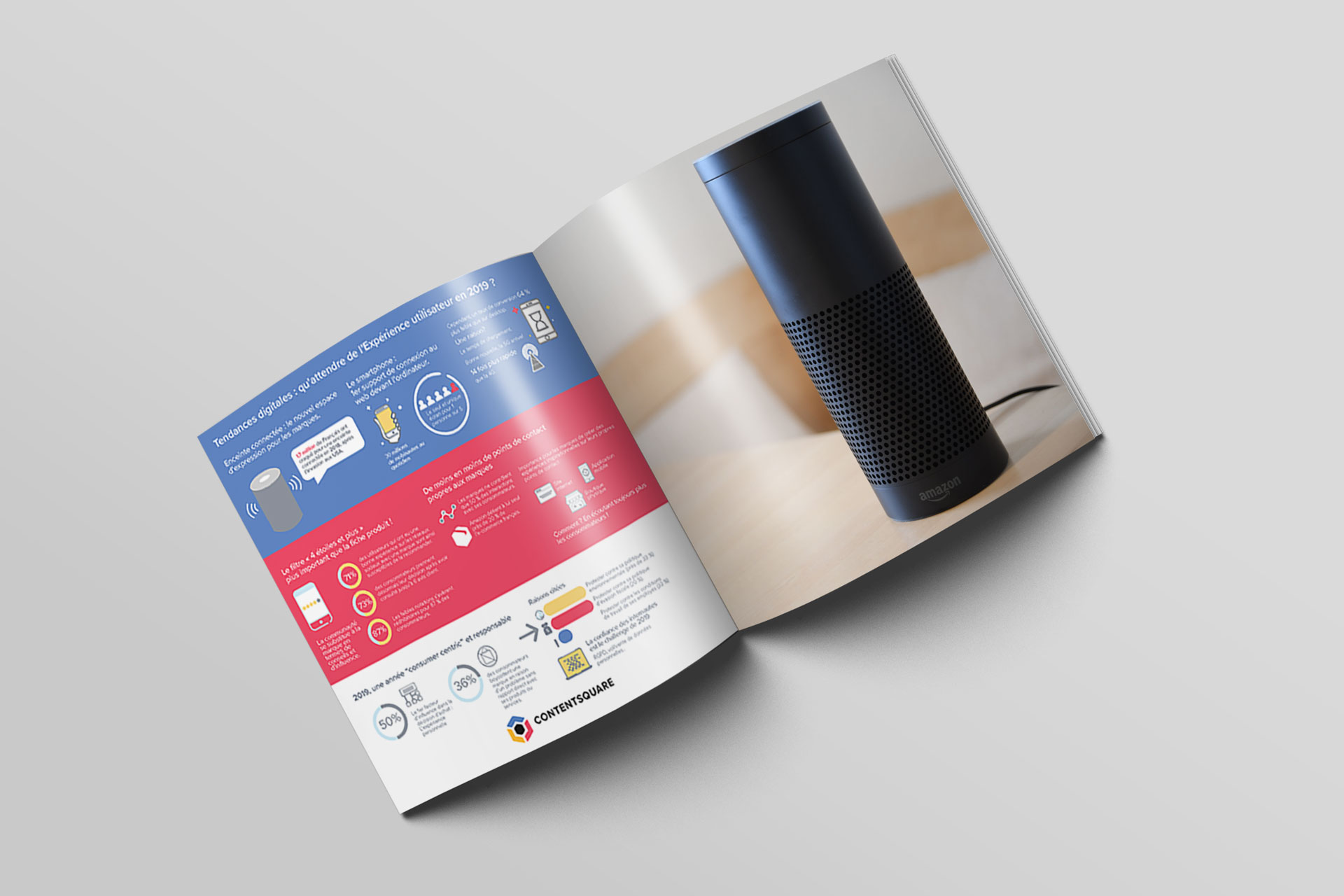 This project is an infographic I created for ContentSquare, which is an enterprise-level UX optimization platform, with offices in New York, the UK, and Western Europe. Acting as a prioritization layer between traditional analytics tools and Optimizely, ContentSquare empowers the entire digital team to identify areas of focus for testing, enabling clients to run more accurate tests and create uplift more often. This particular infographic was centered around mobile and technology use, as well as the use of what the French call “connected speakers,” or what we as Americans call “smart speakers.” I chose to utilize ContentSquare’s primary color palette (red, yellow, and orange), and divide the infographic into three sections. This allows the reader to read each row of information, and guides the eye along the page. I had a lot of fun creating whimsical illustrations for each section, and some were more challenging than others to illustrate- for example, abstract concepts such as consumer engagement. 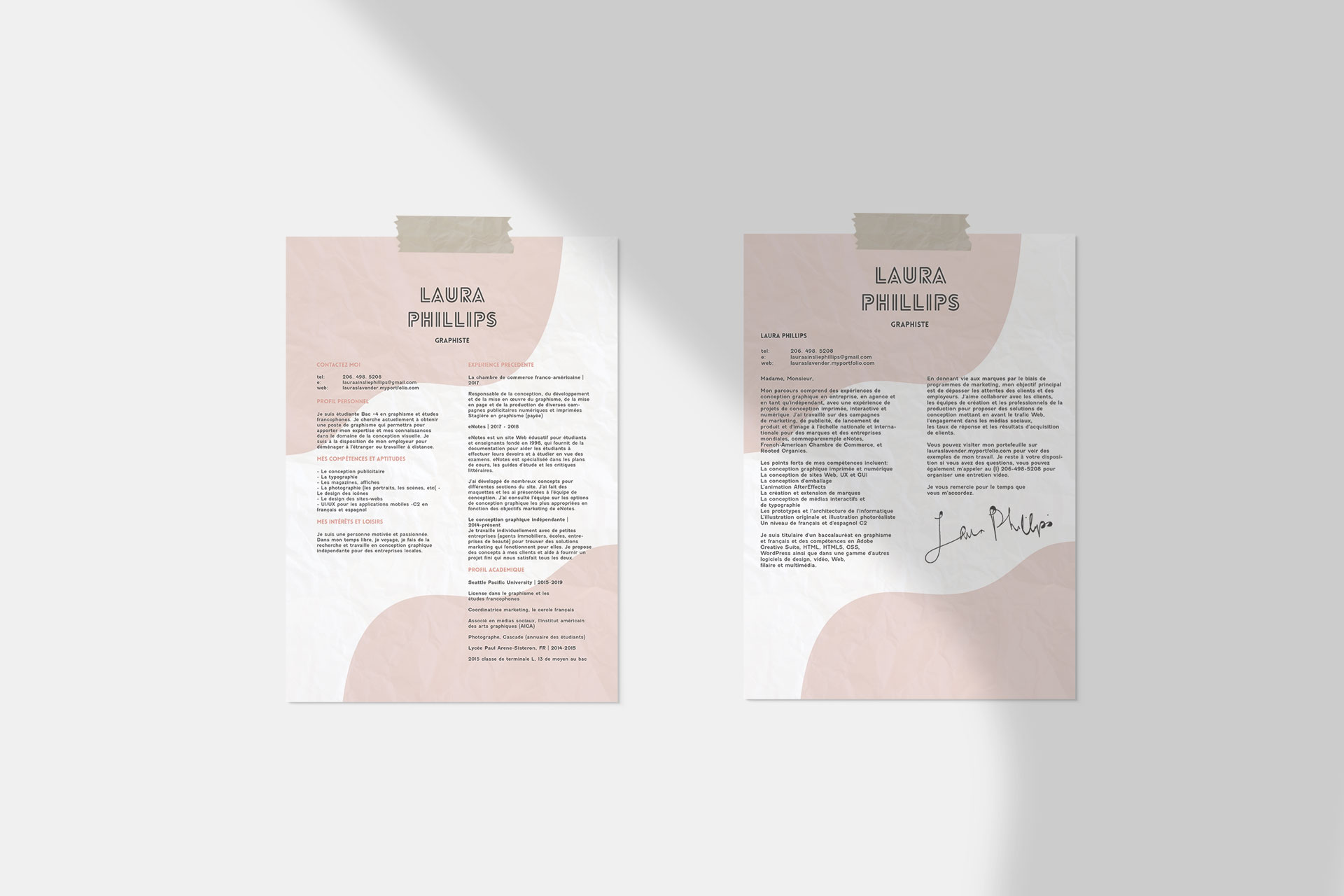 This project was created for my personal brand, serving as a professional letterhead and a resume, designed as deliverables to present to future employers. I wanted to represent my creativity, whimsical style of design, and maintain professionalism. I used a simple color palette of soft pink, white, and black; and an abstract bubble-style illustration to give visual interest to the background of both pieces. I chose to make the columns of text wider and shorter, rather than the more traditional thin columns, to give visual balance and contrast with the background. The fonts I chose are Fenwick for the body copy, for its sans-serif simplicity, and Lovelo/Lovelo Black for my name and title respectively- because I love the depth and movement the fractured lines within the letters give. I chose to use a slightly darker shade of salmon for the titles of the sections, to give some contrast, but not distract from the most important information. 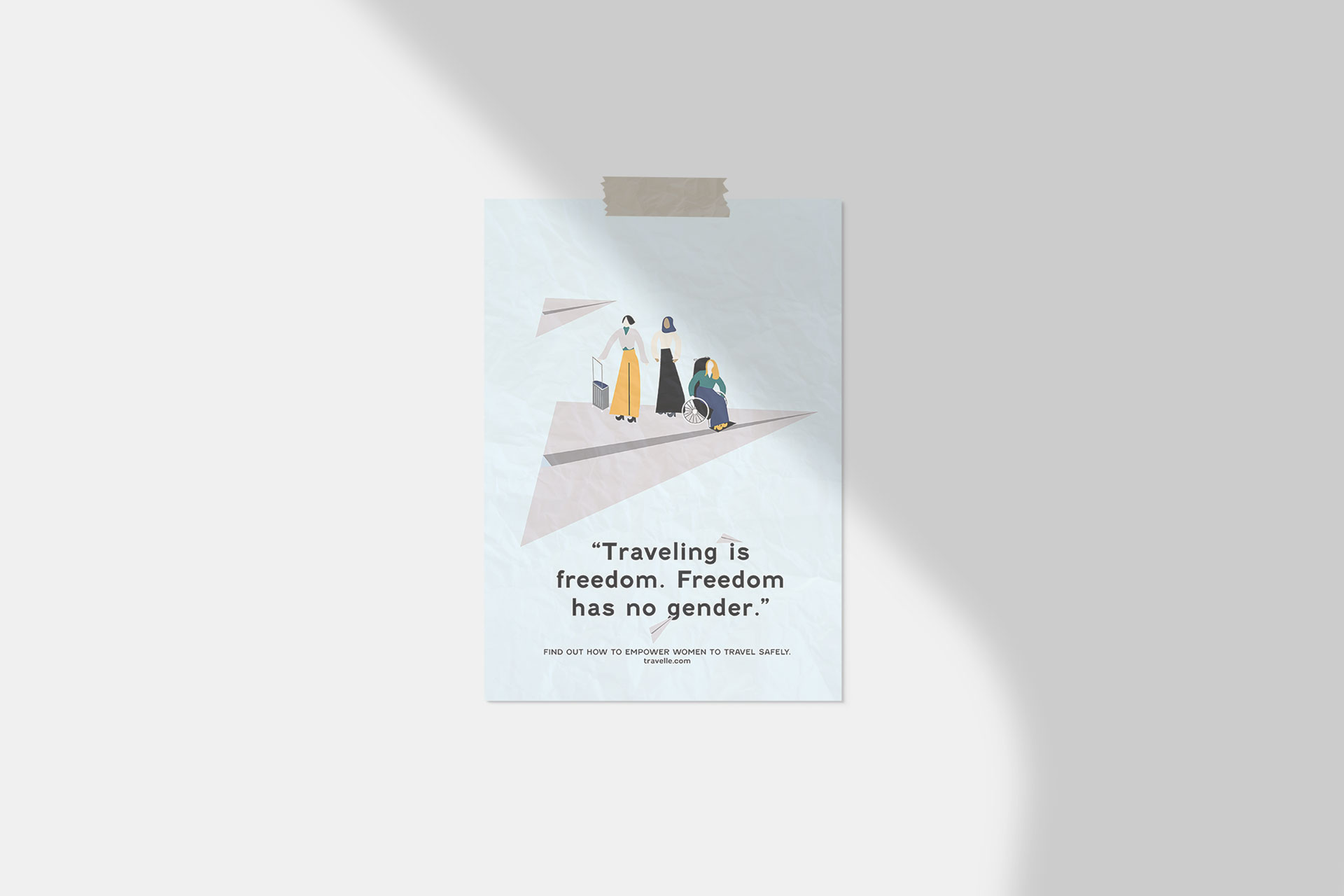 This is a poster, created for a fictional travel service for women called Travelle. The name, as evident, comes from “elle,” the Latin-based root, and French word, for “her.” This poster was created in response to a social action prompt, calling viewers to engage in their communities. According to a 2014 Booking.com survey, 72 percent of American women like to travel solo. Searches for “solo female travel” grew by 52% between 2016 and 2017. However, women face sexual assault, harassment, and even murder while traveling abroad; even if they are prudent and take precautions.

I wanted to create a poster that captured the independence, beauty, and bravery of women who dare to travel alone. I wanted to utilize a whimsical illustration, that depicted diverse women, feeling empowered and free. The symbol of a paper airplane conveyed this beautifully. The pastel palette I chose creates a warm, friendly feel; yet not too feminine, as I received criticisms during my final critiques that the original palette I chose may not reach male audiences as well as a neutral one might.